For 35 years now, there has been a raging debate within international NGO circles around the use of images of starving black children in fundraising materials. One seminal piece by Jorgen Lissner in the New Internationalist accused aid agencies of ‘social pornography’ in stripping individual children of their dignity and presenting them to the Western viewer as helpless objects isolated from any social or historical context, and called for an end to the racist distortion that this perpetuated in people’s conception of the majority world.

Lissner also noted that the use of such pictures was already considered unacceptable when fundraising for children’s charities at home. How could aid agencies get away with such double standards just because their images depicted children from other parts of the world?

The impact of the article was far-reaching. By the end of the decade, the General Assembly of European NGOs had adopted a code of conduct which instructed all aid agencies to refrain from using ‘pathetic images’ or ‘images which fuel prejudice’ in their depiction of the majority world. An updated code adopted in 2007 affirmed that all future communications by international development NGOs must be based on core values of human dignity, respect and truthfulness. Similar guidelines have been introduced in other countries, including Australia, Canada and New Zealand.

Despite this, recent years have witnessed the return of the starving black child as a stock image in the fundraising communications of far too many aid agencies. NGOs that should know better have reverted to type, calling up disaster images from the 1970s in a desperate attempt to increase their organizational income, whatever the cost. A battle which we thought had been won many years ago clearly needs to be fought afresh in each new generation.

John Hilary (jhilary@waronwant.org) is the Executive Director of War on Want based in London, UK.

Matters came to a head recently when a formal accusation was brought against Save the Children for using degrading imagery of children in its television fundraising, in contravention of the code of conduct. One advert in particular, showing a number of children in varying states of emaciation, had been widely condemned as unethical. It is still online on the organization’s website.

Yet Partos, the association of Dutch international development NGOs which heard the complaint, failed to take any action. In its final decision, the complaints committee noted that NGOs were encouraged to abide by the European code of conduct, but that there was no binding requirement on them to do so.

As Jorgen Lissner noted all those years ago, international NGOs have a choice. They can continue to act as merchants of misery, misrepresenting the majority world and perpetuating their cycles of aid and despair. Or they can embrace active forms of solidarity with those movements around the world that are rising up to challenge the forces responsible for their oppression.

Whatever choice NGOs make, one thing is clear. Colonial images of helpless children awaiting salvation from the hands of Western donors have no place in the 21st century, and we must be prepared to challenge them wherever they appear.

John Hilary is Executive Director of War on Want. His book, The Poverty of Capitalism: Economic Meltdown and the Struggle for What Comes Next, is published by Pluto Press. 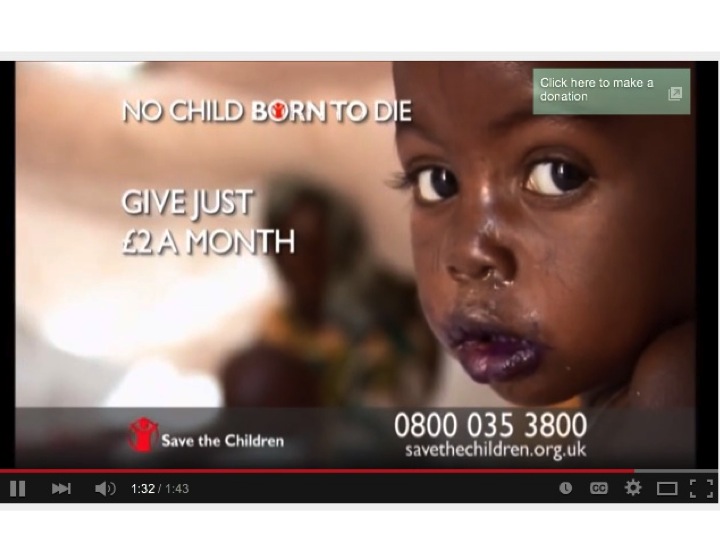 The Save the Children television appeal referenced in the article can be viewed on YouTube at: https://www.youtube.com/results?search_query=save+the+children+tv+advert. The four images that appear in the article  are  screenshots take from the same YouTube link.

NOTE: This article can also be found in its original published format in the New Internationalist at: http://newint.org/features/2014/12/01/development-pornography/

Join the conversation yourself! Submit a blog, commentary or perspective by sending your piece to: HumEthNet@gmail.com